I was listening to an amazing talk by Matias Villaverde and Rens Breur at NSSpain about “Lessons learnt rewriting SoundCloud in SwiftUI”. You can watch the complete talk here.

This talk really resonated with me because I did similar mistakes when building SwiftUI applications. Instead of embracing the simplicity of the framework, I added unnecessary complexity to please the design pattern Gods. This included creating view models for each view, ignoring @FetchRequest and @SectionFetchRequest property wrappers, passing @EnvironmentObject to the view model instead of accessing it directly in the view and much more.

After almost two years of driving in the wrong direction, I decided to slam on the brakes and think about my decisions. In this post, I will discuss the SwiftUI architecture that I am using for my apps.

There is no official name for this architecture but in the iOS community it is known as the MV pattern. This pattern is inspired from Apple’s WWDC videos and sample applications. You can find the links to the sample apps in the resources section below.

For small apps you just need a single aggregate model. This is shown in the figure below. 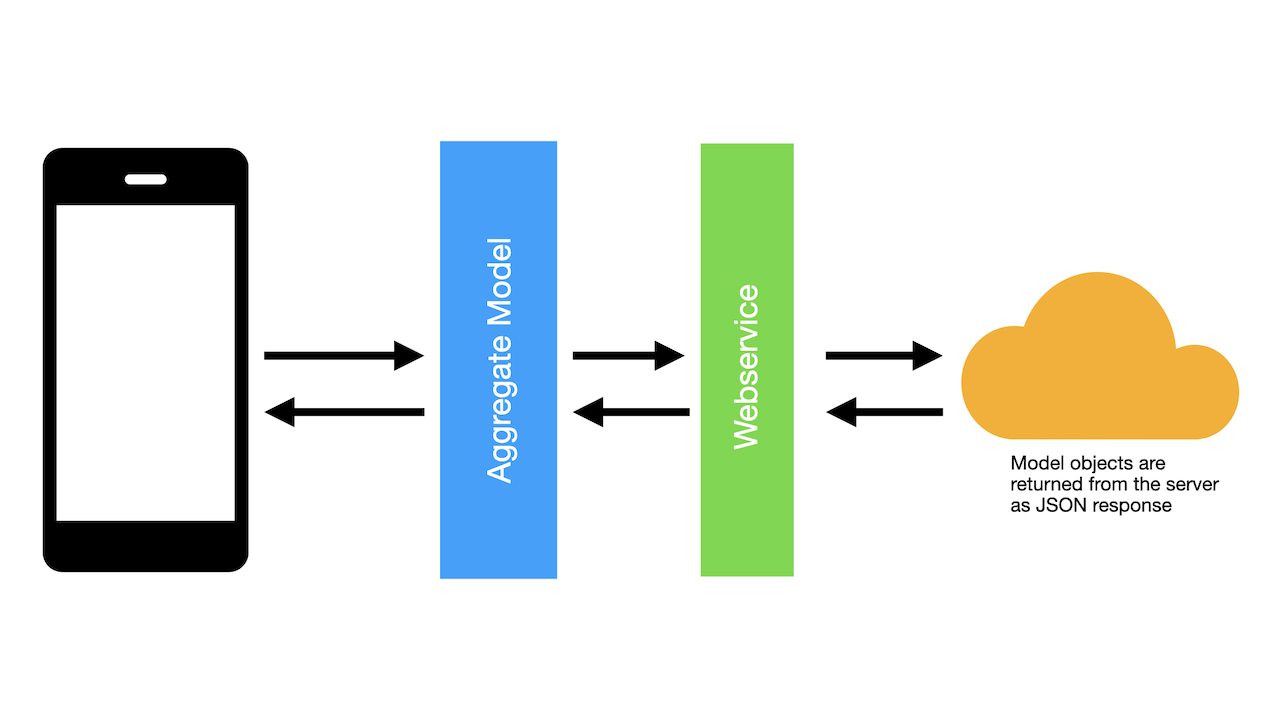 For larger apps, you can introduce several aggregate model objects based on the bounded context of the application. 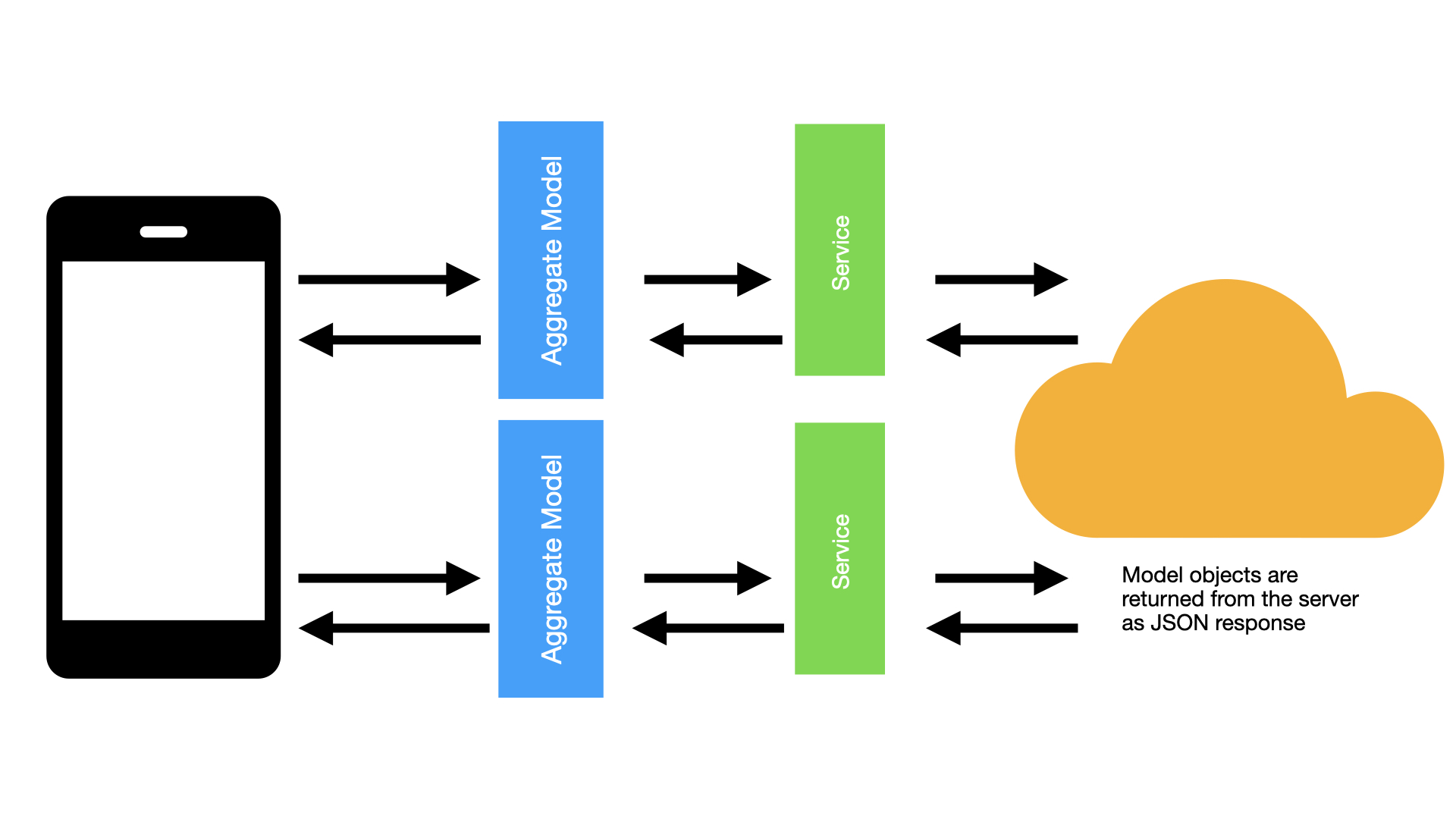 You don’t need an aggregate model per view. The aggregate models are based on the bounded context of the application and not on the number of screens in an app.

This pattern was discussed in Apple’s WWDC video Data Essentials in SwiftUI. 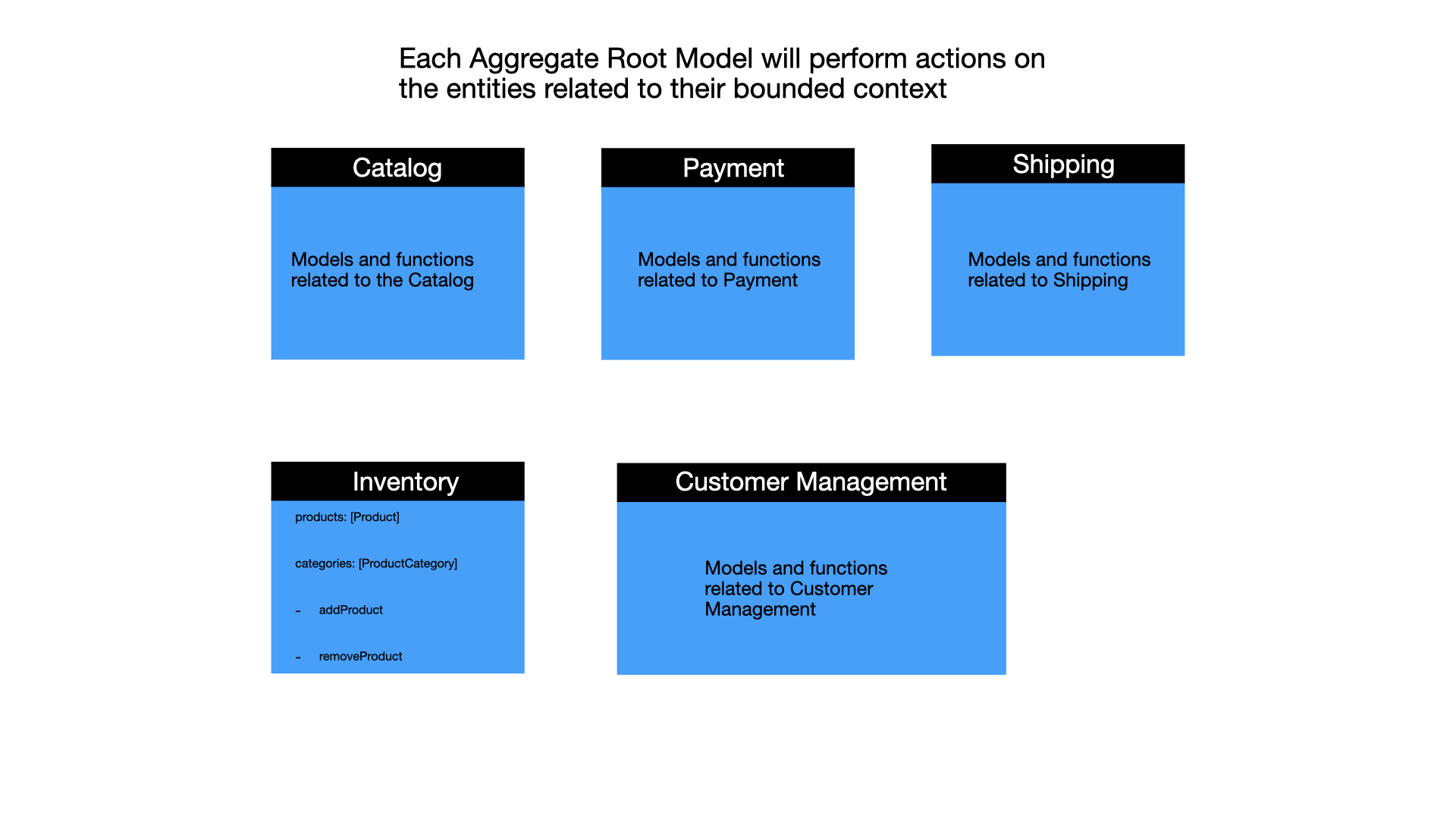 Each aggregate root model will be responsible for performing actions on the models that comes under their context. The Inventory model will allow you to access products, product categories, adding new products, removing products, updating products, searching etc.

Aggregate root models can also communicate with each other to access entities that are not under their context. For example: A Shipping root model can access the Customer Management root model to find the information about a particular customer.

For our small application, we will only be working with a single aggregate root model, larger apps can have multiple root models.

In Apple’s documentation they have used different names for their models. This includes Model, FoodTruckModel, FrutaModel etc. I believe the model name should be based on the bounded context. For an e-commerce app your aggregate root model might be Catalog, Payment, Shipping, Inventory etc. Each aggregate model will allow you to access the entities controlled by the root.

For the sake of simplicity, I am calling my model Model. The basic implementation is shown below:

An aggregate root model may look like a view model but it is not. A root model is not responsible for formatting data to be presented on the screen. Unlike view model, a separate root model does not need to be created for each screen. For smaller apps, you can use a single model for your entire app. If your model is getting larger then it would be a good idea to think about separating it and distributing the responsibilities among different aggregate models. You break a root model into smaller models depending on the bounded context of the application domain. You don’t create root models based on the number of screen of the app.

You can read more about bounded context here.

View is the view model does not mean that you should start putting networking code in the View. As shown in this post, it is a good idea to create a separate networking layer so the same network requests can be invoked in other views.

The complete implementation of the model is shown below:

The model calls the OrderService to get all the orders and performs different actions related to orders like inserting, updating, sorting and filtering etc.

You might be wondering that why can’t the view directly call the OrderService and store all the orders in a local/private state using the @State property wrapper. You can definitely do that but since, we are allowing users to edit the orders on a separate screen and then refreshing on the original screen it would make more sense for the orders to be available globally. Also, if you store data in view’s local state and the same data is needed by other views then you will have to pass the state to the child views using @Binding. Again, there is nothing wrong with that but it can end up being more work specially when you are passing state too deep into the view hierarchy.

Another reason is that root model can provide sorting, filtering capabilities, which does not fit well in the OrderService. The root model can also invoke multiple services to aggregate and return data to the view and even providing caching support (through a caching layer) to the app.

Next, let’s take a look at the OrderService.

If needed you can also create a generic webservice, which has all the basic operations like getAll, getById, delete etc.

Next, let’s take a look at the implementation of the SwiftUI views.

SwiftUI views are not just views but they are also view models. But that does not mean that you should put networking code right inside the view.

By networking code I mean URLSession.shared.xxx. Although it will work but it will be harder to reuse the same networking calls from other views. This is the main reason we created the OrderService. In React apps, developers usually call the networking code using libraries like fetch or axios from directly inside the components. This is perfectly fine until, you need to make the same call in some other component.

In the above code I am injecting a hard-coded base url. In your application, the url can be based on the environment (dev, test, qa, production). This will allow you to easy switch environments for testing purposes.

If you have a large form to validate then you can also introduce a view model, which will be populated through the TextFields. The view model can also provide validation support. One possible implementation is shown below:

The same techniques for validation are used in React apps. If the field validation is unsuccessful then a flag is set, which displays the error message to the user.

Even HTML provides attributes to validate the user interface. Take a look at the code below:

In most client/server apps, business rules lives on the server and the client just provides the UI.

One of the benefits of using the @EnvironmentObject is that when the orders are altered, views are automatically reevaluated. Reevaluation is not the same as rerendering. Revaluation means that SwiftUI will look at the diff tree and then decide, which views needs to be rerendered. Revaluation is a very fast process, so although your view body might be getting fired constantly it does not mean that all views in the body are getting rerendered.

Take a look at the code below:

In the same way when using the @EnvironmentObject, several views may get revaluated but only those who needs to be rerendered are rendered again. If you are getting unwanted rerendering then you can always split your @EnvironmentObject into multiple objects. This is shown in my article Slicing Global State in SwiftUI Using Multiple EnvironmentObjects.

One of the arguments of using MVVM with SwiftUI is that it allows developers to easily perform unit testing for their views. This is a valid argument, because having a separate layer of view model does allow easy testing. You can invoke actions on the view model and witness changes on the view model properties. This kind of in-memory UI testing may not possible without an extra layer of view model but you can still write UI Tests for your SwiftUI applications. You can either use built-in Xcode UI Test Project or a framework called ViewInspector.

Kent Beck said it best “I get paid for code that works, not for tests, so my philosophy is to test as little as possible to reach a given level of confidence”.

Nowadays, I see developers religiously testing every single line of their code and aiming for that 100% code coverage. Developers are paid to write features/code, not unit tests. But I always witness in projects that test code is almost 3 times more as compared to the actual codebase.

Testing is definitely very important but only if you are writing meaningful tests. Consider a case, where we have to write a unit test for a following scenario.

If this operation is part of your model then your test should create a user, add a budget for that user in the database. Then add a new transaction to that budget and then check if the transaction was added successfully or not.

Unfortunately, most developers will ignore the database part and run their test against a mocked object. In the end their test run fast and they are happy to see the test pass but what exactly did they test. They simply tested that their mock object work as expected. In this scenario a real test would hit the database and check if all the rules were met or not.

For the above scenario we are considering on device database like Sqlite being managed by Core Data or Realm.

I have worked with companies that have more than 2000+ tests. But if you looked closely you will find out the tests were not testing anything related to the business domain. They were actually testing the programming language. This is why it is extremely important to test the behaviors of your application instead of the implementation. When writing a test, ask yourself what business logic is being tested. If you cannot answer that question then stop writing the test.

Testing is very important that is why I give more precedence to domain layer unit tests and full system end-to-end functional tests. Functional system tests will ensure that the system works with all the other layers of the application. You don’t have to write tests for your controller or view models. All of those layers will be tested during the end to end functional tests.

I cover end-to-end testing in my video course.

SwiftUI already has MVVM built-in. This means you don’t need an extra layer of view models for your applications. A lot of other developers are coming to the same conclusion and rewriting their apps using features provided by SwiftUI. SwiftUI adds some magic to their property wrappers, which makes everything simple and performance efficient at the same time. For your next app, try creating views without view models and allow the views to directly talk to the model objects.

Instead of fighting the framework try to embrace it.

You can download the source code using the link below: